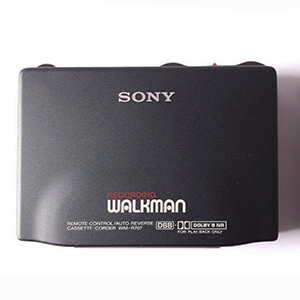 Tha smallest recording walkman ever made

The beautiful little WM-R707 is surely one of the smallest stereo cassette recorders there will ever be. Scarcely larger than a cassette in its case, the WM-R707 was nevertheless a fully functional machine, which, as well as offering basic recording facilities, also offered auto reverse and Dolby B NR/metal tape compatibility/switchable "mega bass" on playback. The casing was made mostly of metal, finely detailed and finished in very dark blue (so much so that it could be mistaken for black in the absence of anything to compare it with). Details such as the tiny but easy to use controls and the cast, polished cassette door hinge, complete with Sony logo in relief, completed an impression of quality and perfection in miniature.

The WM-R707 was powered by a single rechargeable battery of the familiar rectangular type. Unusually, this was housed behind a long cover that was accessed by opening the cassette compartment. Normally this style of battery would have been loaded through a small hatch in one corner of the exterior of the casework. In case this battery should fail, an external holder was provided that allowed the machine to run from a single “AA” type cell, though the holder itself was not styled to the same level of detail as the rest of the package. The main controls were placed along the "long" edge opposite the lid hinge, and included a combined lid catch/"hold" switch and a sliding control to activate the recording function. This type of control was considered to be less likely to be operated by accident than a conventional push button. Also visible on this surface were two prominent bumps at each end. The purpose of these was to house the sensing levers for the cassette erase-protect tabs, for the case was too small to conceal them normally.

Three function indicators were provided, two to show the tape direction and battery strength and a third for record mode. Recordings could be made from an external microphone only, with "plug in power" for amplified types being supplied to the socket. Unusually for a miniature recorder, proper electromagnetic erase heads were fitted (as opposed to mechanically operated permanent magnets, an arrangement much beloved by Sony). Two were required as the auto-reverse mode functioned on record as well as playback, giving a maximum recording time of two hours.

The supplied in-ear headphones included a remote control in the lead which could operate all the basic functions, including recording. It also had a tiny sliding volume control, though since this did not disable the main one the two had to be set carefully in conjunction to get a good range of adjustment. The remote control could not be used with normal headphones and its connector to the main machine was non-standard, but to enable ordinary types to be used an adaptor was provided as part of the outfit. The special headphone/remote control plug latched into place, and a release lever inside the cassette compartment had to be operated before it could be disconnected.

The WM-R707 was an expensive luxury item and came with a good selection of accessories. One of these was a carrying pouch which along with the Walkman logo had "anytime, anywhere, since its birth in 1979", referring to the TPS-L2 - the original Walkman.
Via walkmancentral