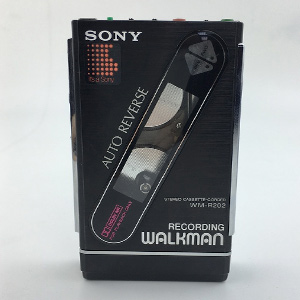 The WM-R202 was very similar to the WM-102, but with one important difference, it could record.

The WM-R202 was very similar to the WM-102, but with one important difference, it could record. Although the casework was much the same size as the WM-102, the styling was considerably more sombre, with a plain, unadorned brushed silver finish for the cassette door. In one corner of the cassette door was an indicator which showed the direction of tape play, an important feature for a recorder so that one knew on which side of the tape a recording would be made. This feature was not fitted to the WM-102. As was normal for Walkman recording models (except the WM-D6C and TC-D3), recordings could only me made on ferric tape, though chrome/metal tapes and Dolby B NR could be used for playback.

The WM-R202 used the same battery arrangements as the WM-102, with the choice of two external battery holders, one for an “AA” cell and one for a rechargeable battery. There was no built-in microphone, though a miniature stereo microphone, complete with stand, was included with each machine.
Via walkmancentral