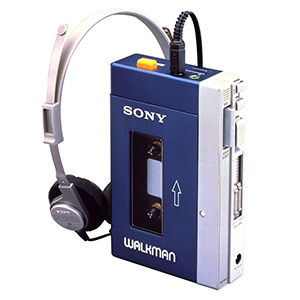 The TPS-L2 was the first commercially available personal stereo cassette player. Created by Akio Morita, Masaru Ibuka (the co-founders of SONY) and Kozo Ohsone, in 1979. For the next 20 years, such machines became the essential accessory for serious and casual listeners alike, and changed the way that music was listened to and enjoyed. Several names were suggested for this completely new class of machine, including Soundabout and Stowaway, but it was the third name, Walkman, that stuck. Only later examples had Walkman written on them, early ones (like the example in our photograph above) simply had the word "Stereo" embossed on the cassette door.

The TPS-L2 used the basic case and mechanical parts of the TCM-600 cassette recorder. The only change to the mechanical parts was the fitment of a stereo tape head and the removal of the record key, erase protection lever, erase head and tape counter. The mechanical performance of the deck, which was originally designed more with speech and dictation in mind rather than music, was considered suitable for high-fidelity music reproduction, a clear demonstration of the high quality engineering found in the more upmarket Sony recorders.

Part of the genius of the personal cassette player concept was the elimination of the unnecessary. In the case of the TPS-L2, that meant not only no recording circuitry but no loudspeaker either. The mouldings in the chassis that accommodate the loudspeaker magnet in the TCM-600 are still visible in the TPS-L2 however. Removal of the recording circuit meant removal of the microphone socket too, though the internal microphone remained. This was used for the now famous "hot line" function. Pressing an orange button on the top of the machine (fitted in the place where the record and fast-play controls had been) faded the cassette sound down and mixed in the output of the microphone, so the listener could be talked to without stopping the tape. This was deemed attractive as two headphone sockets (humorously labelled "guys" and "gals" in the versions for some markets) were fitted so that two people could listen at once. The hot line function made a pause control unnecessary, so the arrangement fitted to the TCM-600 was removed.

The TPS-L2 was actually slightly larger than the TCM-600, partly to house the volume controls. The TCM-600 had a small edge-wise rotary control, but miniature volume controls of any type were simply not available in stereo form at the time, so two independent sliders had to be used instead. In addition to this, a two position tone switch was fitted, which allowed chrome tapes or music cassettes encoded with Dolby NR to be played back without excessive treble.

The TPS-L2 initially sold slowly but with skilful marketing demand soon soared. It was not cheap (around £ 100, with a second set of MDR-3 headphones costing around £15 extra) but gave good performance and created a new way to enjoy music. A whole new market had been created and within a couple of years every major Japanese electronics manufacturer had begun to offer something similar.
Via walkmancentral 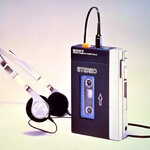 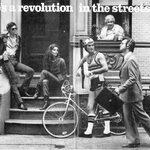 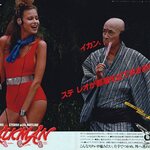 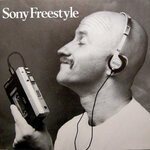 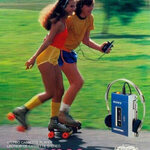 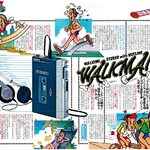 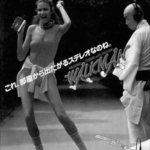 1979 First Walkman Ever Made! (Guardians of the Galaxy Sony TPS-L2)